Essay one: Hide and skin production around the world

Tanners are entirely dependent on a reliable supply of raw material, but this first essay in the Nothing to Hide series shows that, without the leather industry, farmers, meat companies and society (including some of the most vulnerable societies on earth) would face serious and expensive challenges over what to do with the hides and skins that consumers’ desire for meat and milk generates. Letting this by-product go to waste would be a bad choice for financial, social and environmental reasons.

The size of the world’s cattle, sheep and goat herds is greater than many consumers imagine. Demand for meat and milk around the world remains high and is growing, especially in developing economies. The meat and livestock sectors are important and lucrative parts of the global economy (because meat and milk mean money). An inevitable consequence is the high volume of hides and skins that abattoirs have to find a home for. Turning material the meat industry cannot use into leather, (a protective, versatile, durable, breathable, circular and beautiful material), is, in the eyes of most of humanity, the best way of dealing with it. This adds value to the animal, creates jobs and wealth and enhances the lives of people everywhere.

In any case, few alternatives exist. Landfill sites fill up quickly these days and are becoming increasingly expensive. Many governments want to impose steep rises in landfill tax and some, Germany’s federal government, for example, have banned the dumping of most forms of solid waste in landfill. In the UK, standard landfill tax standard rates went up to £94.15 per tonne of material dumped1 in April 2020, an increase of 47% in eight years. The authorities have said specifically that they want to encourage new uses for old material; as people have known since the earliest times, there is no better example of this than using discarded hides and skins to make leather. The aim of this Nothing to Hide essay is to show that the volume of raw material arising from the global meat sector is so great, any other method of disposing of hides and skins could pose serious challenges to the meat industry and to society.

Considering only cattle, sheep and goats (the animals from which most of our meat and, in turn, leather comes), this paper will go on to present the most up-to-date statistics available for herd sizes and slaughter levels, along with an analysis of the figures.

Across all breeds of cattle, from Alentejana to Xinjiang Brown, the global herd size in 2019, according to the Food and Agriculture Organisation (FAO) of the United Nations, was 1.57 billion head2. It identifies the countries with the largest cattle populations as: Brazil with 214.6 million head, India with 193.4 million, the US with 94.8 million, the 27 European Union states with a combined total of 76.3 million, China with 63.5 million and Ethiopia with 63.3 million (see Panel 1). 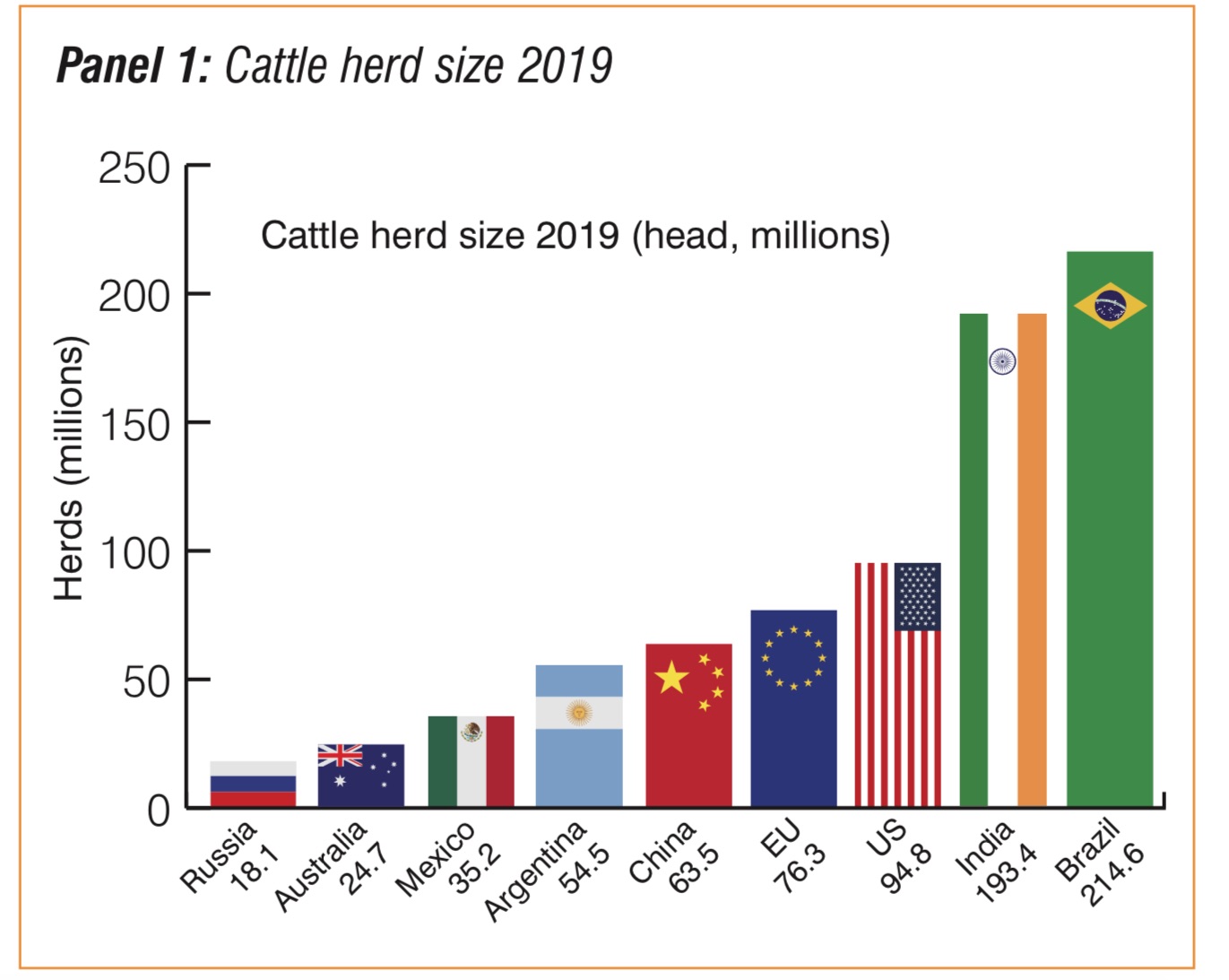 Sticking with FAO figures, the organisation gives the size of the global goat flock in 2019 as 1.23 billion head, while the figure for sheep is 1.4 billion head.

Of interest to us now is to know how many hides and skins farmers and meat companies produce each year when they send animals from their herds and flocks to slaughter, which they do to satisfy demand for meat and to manage livestock populations. For cattle hides, the 2019 total was 341.1 million. The figure for goatskins was 648.2 million and, for sheepskins, it was 730 million. FAO also gives the weight of this material. Its figures are 9.1 million tonnes for cattle hides, 1.7 million tonnes for goatskins and 2.3 million tonnes for sheepskins, giving a combined total for the by-products that tanners could, potentially, turn into leather of 13.1 million tonnes2.

We know that not all of this material does make its way from abattoirs to tanneries. Industry body the Leather and Hide Council of America (LHCA) has calculated that, in 2019, 5.5 million hides generated by the US livestock industry failed to reach the leather value chain3. This figure represents around 16% of the total number of hides the meat and livestock industry generated in the US that year. LHCA put the number of wasted hides at 5.5 million based on public data from the US Department of Agriculture (USDA) and the US Census Bureau. The slaughter numbers (around 33 million head of cattle in 2019) are regularly published by the USDA and widely circulated (leatherbiz publishes these figures every Friday).

Next, LHCA compared this data with its own figures for the exports of wet-salted and wet blue hides, information it publishes every month using data from two primary public sources: US Customs and USDA. The total figure for 2019 was 23.6 million hides. It then estimated the number of hides that are consumed domestically in the US, based on an average of previous years’ data, and came to the conclusion that the total number of US hides that went into leather production, domestically and internationally, was 27.5 million, leaving 5.5 million hides unaccounted for.

At the end of 2020, LHCA considered what the global picture might be when it wanted to figure out if hides that go to waste may generate higher greenhouse gas emissions than tanneries emit in processing the material to make leather. It estimated that 55% of the world’s total supply of cattle hides are going into the leather value chain and that 45% are going to waste, but said these figures were illustrative.

Going with these illustrative figures and applying them to the statistics from the FAO, it suggests 187.5 million hides were made available to tanners in 2019 and that more than 150 million were not. Again, for illustrative purposes, we can calculate that the cost of putting these wasted hides into landfill if all countries were to charge the same rate of landfill tax as the UK, £94.15 per tonne, meaning disposing in this way of all the wasted hides would cost £385 million. If all the hides that the livestock and meat industry generate were to go into landfill in places with this rate of tax, the levy would be £1.23 billion. In this scenario, without factoring in transportation costs and other expenses, it would cost the meat industry the equivalent of $1.7 billion per year just to dump the hides it generates into landfill sites. It’s worth pointing out that the UK landfill tax is particularly expensive, but it’s a stark reminder that the cost of dumping municipal waste is only going in one direction, and that’s upwards.

As matters stand, of course, rather than being a $1.7 billion cost, the raw hides can earn the meat industry revenue as a result of tanners’ willingness to buy the material and transport it to leather-making facilities around the world for processing. No one denies that it’s in tanners’ interest to have access to this raw material, but it is equally clear that the meat sector gains, too, by earning money from this by-product and by avoiding the need to take care of disposing of it as waste.

LHCA’s work in 2020 also suggests an environmental benefit. Using figures that it has said are in the public domain and speak for themselves, LHCA calculated that hides weighing, on average, 25 kilos could each be expected to generate emissions of around 22.25 kilos of CO2-equivalent if left to go to waste4. From other statistics that are also in the public domain, having been published in sustainability reports from leather manufacturers and tanning industry associations, it is possible to calculate that the emissions that a high-performing tanner would generate by transforming the same material into finished leather instead of wasting it would be 4.55 kilos of CO2-equivalent per hide5.

According to a World Bank study, communities around the world generated a total of 2.01 billion tonnes of municipal solid waste in 2016. It points out that growing populations and rapidly increasing urbanisation suggest this figure will go up. The World Bank predicts that, by 2050, the total will be 3.4 billion tonnes per year6. Governments and good corporate citizens everywhere need to take action to lower the impact of municipal solid waste, the report urges.

High-income countries generated a combined share of 34% of the world’s waste in 2016, it continues, despite having only 16% of the global population. By 2050, its projection is that waste-generation in Sub-Saharan Africa will more than triple from current levels, while South Asia will more than double its waste stream. “Mismanagement of waste is harming human health and local environments, while adding to the climate challenge,” Laura Tuck, vice-president for sustainable development at the World Bank, has said. “Unfortunately, it is often the poorest in society who are adversely impacted by inadequate waste management. Our resources need to be used and then reused continuously so that they don’t end up in landfills.7”

Either we use the material, or we lose it. If we choose not to use it while farmers keep raising cattle, sheep and goats and meat suppliers keep sending the animals to slaughter, there will be a steep price to pay.

Nothing to Hide © is a registered trademark of World Trades Publishing
This website is kindly supported by: